Why I almost never use my damned expensive gaming laptop for actual gaming. 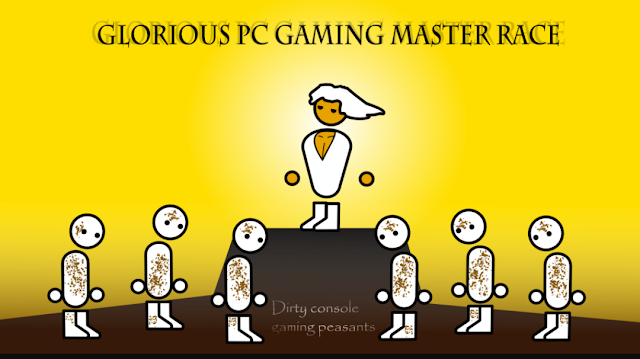 Disclaimer: I'm not aiming to knock PC gaming for those who love it, merely defending the validity of the often frowned upon preference for console gaming.

The pro-console gaming argument that it’s ‘the love that others simply cannot understand’, is regarded in PC gamer circles as a last defence trotted-out in a cheap bid to end discussions. That’s as maybe, but perhaps some individuals have a love for console gaming that is all-too-easy to understand given the right context.

We all have a choice, PC’s don’t necessarily exclude anyone who can play consoles. Like countless others, I literally have a choice, having bought a high-end gaming PC for work. Does that sound daft? Because it isn’t. Though it’s clearly understood that gaming PC’s spank their equivalent vanilla competitors at gaming, the little known secret is that they are worth buying if you don’t game, because they do all the boring stuff quicker too. But I digress.

My default gaming personal preferences can be easily explained by conducting a postmortem on my recent experiences with Microsoft’s ‘Play anywhere’ initiative and Gears of War 4. Don't get me wrong, I do think It’s a great idea and I applaud the way they’ve pulled it off. It was capital to get Gears 4 for free on PC with my Xbox One purchase. It plays tasty too: the MSI Laptop I use benches it at 60fps on Ultra settings.. when I can be arsed to get the thing out. 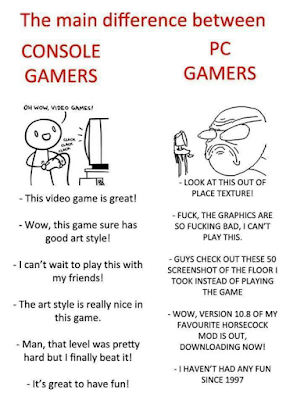 Shame then, that today was one of those regular occasions the system had to shit-the-bed. I had to spend no-less than 40-fucking-minutes dicking about on forums only to find out that the Windows update I needed to stop a bug with downloading the game last week, meant I would in-turn need an obscure 'Killer network' Bluetooth driver from December last year just so my mouse could start working again. One has to appreciate the sheer level of incompetence required to ensure that Windows 10 protested that the Bluetooth was actually working in every setting throughout the whole ordeal, making me think the devices might be broken. Doubt and confusion, seasoned with a creeping sense of anger always puts me in the playful mood for fun. When I use PCs, if it ain't one thing: it's a motherfucking other, if I am allowed to paraphrase Snoop.Apparently every time Windows updates, MSI Laptop owners have to search out rarefied drivers and re-calibrate every third party feature from the surplus-to-requirements, 'Jet fighter inspired' multiplayer audio to the Networking 'killer doubleshot' system. Stupid me for not knowing they don't update themselves and instead just stop working, one by one, with no notification whatsoever.No matter how carefully I've built, or how much I've spent, every PC I've ever owned (and I've had plenty of desktops and laptops in my time) has given me at least an hour of bloody arse-ache every other time I turn it on.. and people have the temerity to ask why I prefer to pick up a console pad and just play! I still haven't even clocked the new Doom I bought on Steam because it is such a pain in backside to simply sit down and play on this format. If I'd just bought it for my PS4 or XB1, It would be on the finished pile and I'd be off on to pastures new instead of fiddling about, trawling forums, trying to find out out why there was a diagonal tear on-screen when my Graphics card should eat the game for dinner on Ultra. By the time I'd finally fixed that, I had already lost the will to continue and slammed the thing shut.Again, just to be absolutely clear: I'm not knocking PC gaming for those who love it, just making a cathartic expression as to why individuals like myself shun them for hate of all the housekeeping and problem solving their continued use demands. I'm an adult with responsibilities and that sort of dossing about cuts into my scheduled game time. I don't remember the Atari ST and Commodore Amiga giving me such a sore arse, we just stuck the floppy disks in the side of them and played. Most of the time. What happened to PCs like that? And don't say Mac: I'm talking about gaming here.
Meanwhile, within seconds of being cold, my PS4 can be chucking Bloodborne around the big screen perfectly well for my needs. Likewise I can flip on my Wii U for some Mario Kart or take up an Xbox One pad and be presented with Gears 4 still looking a peach while playing 60fps, headset and gamechat working without a hitch or 10 minute session of checking sodding properties and device settings.

We all know a ‘PC Master race’ goon who talks all day about Ultra settings and 4K, but can’t run Doom. Statistically we all know one. Steam knows the capability of its users' PCs and stated at Doom's launch that barely 40% of Steam users could meet even the minimum recommended system requirements. A confirmed suspicion and a fair indication that far more than half of PC gamers are able to achieve the quality of gaming experience found on the standard consoles with their aging rigs. There are also plenty of points to commend and condemn console gaming, but for myself, and many others, the lack of wasted time and aggro-baggage PC gaming generates is a prize beyond price. 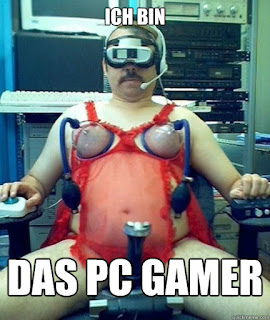 Want to play a game optimised to look and run as best it possibly can on your hardware, or do you want to fiddle for ages on menus with a gazillion combinations of graphics settings until you find one that doesn’t drop frames and you're only pretty sure is the best? Heaven knows, I plead the first option, just press start.

So, far from console gaming being ‘the love that others simply cannot understand’, I’d suggest that it should be impossible not to see the attractions either of the formats offer exclusively.

You see, contrary to popular belief (Sorry self-certified members of the ‘Pc Master race’), neither console, nor PC are universally the best place to game, the only factors signalling a preference are those that you determine yourself.
Posted by Unknown at 15:44