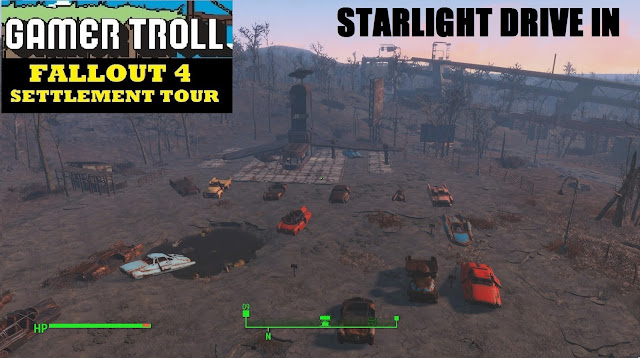 This 9th settlement tour at Starlight drive-in is the grandest of Gamertroll's base builds so far!

Not only does Starlight Drive-in present a fantastic opportunity to construct a monster settlement, but it's also the place Gamertroll finally cracked the hideous Benevolent leader trophy/achievement.

If you'd like to see exactly how Gamertroll got the Benevolent Leader Trophy, I've attached a footage of the nonsense tactics involved towards the end of this Video (about 16.00m mark) along with the moment Happiness final ticked over to 100!

Believe it or not, there are actually a few base building tips and tricks discussed in this episode aside from the tour: like a trick showing how to reduce the irritating noise of power generators!

Gamertroll has become fascinated by Fallout 4's settlement building, stopping to build up each and every settlement location in the game. So long as it's fun, there will be tour videos for the whole of the Commonwealth in the coming weeks!

Have you built something I'd want to see, like a pier on Nordhagen or a bowling alley on Spectacle island!? Please post the link to your videos in the comments folks.