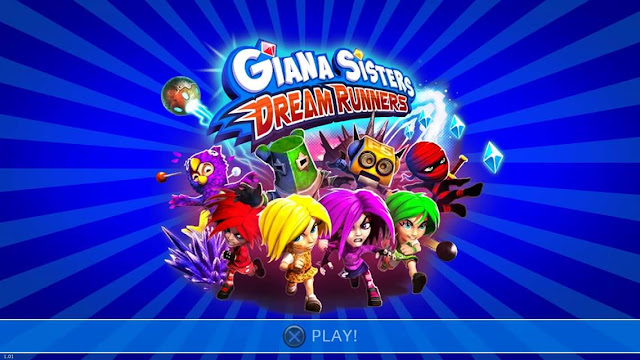 Gamertroll had moderately hopeful expectations for this game after Black Forest's previous effort in 2012. That former game, Giana Sisters: Twisted Dreams came about as a result of a successfully crowdfunded sequel to the original cult platformer released 1987. What's more, it is fair to say that the series come back was well received by fans and critics alike.

The dubious nature of the legality of the original Great Giana Sisters game is still debated today, being as it was, a barefaced ripoff of Mario games made for every system except those of Nintendo. Normally a notoriously litiginous firm, the Japanese Games Giant completely ignored the blatant conceptual infringement back then, even to the point where much later, the kickstarted 2012 sequel saw release on their DS handheld. Giana Sisters: Dream Runners is a successor to this DS game, in name only.

For this installment Black Forest has boldly decided to scrap the old-school 2D Mario-aping platform formula and instead dubiously opted to reduce the franchise into a horizontally scrolling party race game where players need to sprint and leap ahead in order to push everyone else off the rear of the screen à la Micro Machines or more specifically Speedrunners on the PC. Just A few seconds in and you'll realise that nobody at Black Forest understood the maxim that if a game is only going to do one thing, that thing had better be good. 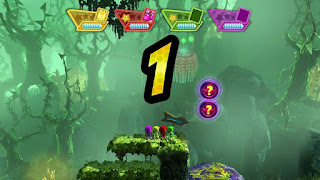 Dream runners is not a bad concept in principle, but in practice it just plays like a bad peripheral mode to a main game, only it is the entire game. Ever played Mario party, Fusion frenzy or other similar party packages of meta games? GSDR contains little more entertainment and content than a single one of the mini-games those other titles offer.

After so much initial negativity Gamertroll naturally feels the need to grasp around for some backhanded way to complement the game in the spirit of sporting respite. Unfortunately the graphics provide no such opportunity. The character models and environments could be aesthetically passable if the screen ever settled on a scale that worked for the players. No matter how close the contenders are in the race, the screen never zooms in close enough to make for comfortable viewing. Couple that with the blistering speed of play which effectively scrolls everything past in a blur and you have much less a party game, more of a frustrating squint-a-thon.

Determining who's who is endlessly challenging (especially Yellow and Green) as the only difference in characters is one of colour. When humans play, somebody can constantly be seen to lose by darting off in the wrong direction because they thought they had made a jump at the same time as another player whose avatar overlapped their own. Losing by confusion is endemic in this game.

The power ups and collectable attacks are rendered almost completely worthless by the lack of visual clarity when playing. Even the fancy charge jump is best left alone in favour of just using basic, more predictable modes of movement to negotiate obstacles.

The only time you will see anything clearly, comes when not actually playing: When the screen is stationary at the beginning or the end of a round when the victor's avatar is alone on screen, squeaking jubilantly with fist pumping the air. It was in those brief moments that Gamertroll glanced searchingly at the environments and found there wasn't much to miss anyway. It hardly invests one in the integrity of the visual design to suddenly realise when static, that the big glowing blobs on the Halloween stage are just a high resolution cartoon rendering of a lit candle the size of a garden shed. 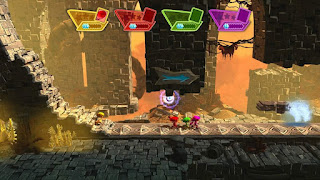 Even disregarding odd issues of scale and incongruity, held up to scrutiny, the nine stages featured are all generic fare in the extreme. Green fields and deserts with dinosaur bones: check. Fire and Ice: check. Waterfalls, cliffs and castles: check. Wacky Halloween stage: check.. you get the picture. The only novelty with the stage themes is that (in a nod to Twisted Dreams) there are dream switch buttons placed on the courses that can alter stages from what passes as the real world, to the dream world. Each time a player runs through a switch, it for example changes the fire theme to an ice theme and back again, altering obstacles on the fly and generally changing the navigation routes available. Again it all just adds to the confusion. Due to the difficulty of seeing what on earth is going on, the effect of those dream switches is usually the random and indiscriminate demise of players. As with the use of the weapons pickups, the player throwing the switch is as likely to lose out as anybody else. It's a mess. 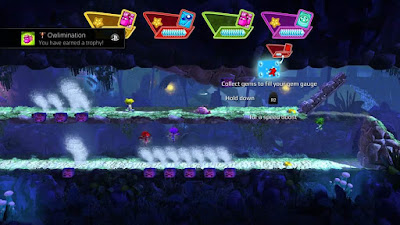 Gamertroll didn't mention the music and sound yet did he? That's because there's little to mention. The music is simply uninspired and the annoying chipmunk "Yeehaa" voice SFX gets old, real quick. In that sense at least, the audio perfectly complements the game.

It's hard to assess the replayability of a game that is arguably not worth playing in the first place, but Gamertroll is duty bound to oblige the will of his readers and the question shall be duly addressed with a straight face:
To be completely clear here, the entire contents of this game constitute a paltry sum of 9, tiny tracks. Playable on a single mode against 4 humans (local or online) or bots. More accurately, you can forget playing this online, nobody plays this game, not even now at launch. At this moment, globally, there are probably more people livestreaming themselves raping chickens than playing Dream runners and it's not hard to see why. With most game Demos having more to do and see in them than Dream Runners, it's hard to fathom how Black Forest came to the conclusion that the included content would be enough.

If you have troublesome houseguests who are constantly stinking up the place, clearing out the fridge, ruining other, decent multiplayer games or otherwise won't leave: this game is the perfect tool. Fire it up and your house will empty in minutes. You'll probably never see any of them again. 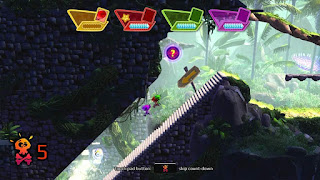 From what Gamertroll has seen, this is easily the worst console game to be released in 2015 so far. Other than the one oblique benefit of helping to banish real life intruders and common house-muppets, GSDR has all the stench of a hackneyed misadventure into free to play mobile game development, hastily repackaged and sold for £7.99GBP for dedicated games consoles. A strongly recommended purchase for nobody.


Review copy kindly provided via TheAlternation.net another independant and trustworthy Multiplatform gamesite which Gamertroll is proud to contribute articles and Reviews. Check it out folks!
Posted by Unknown at 21:34