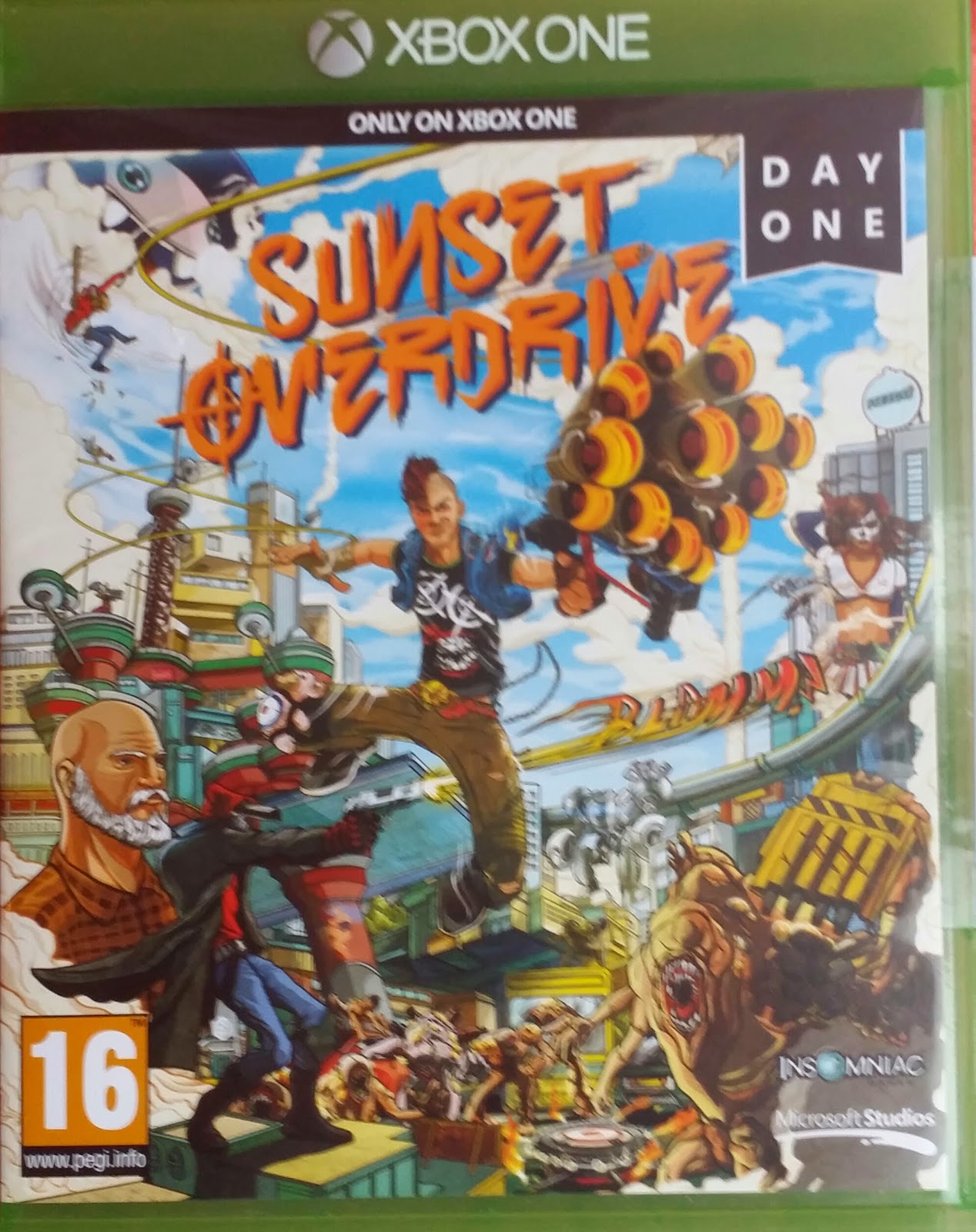 "No more job, no more uniform"
Gamertroll knows tune of liberation software when he hears it and Sunset Overdrive (S.O.) Is all about arcade-themed liberation for the protagonist and for the player; "Apocal-awsome!" Apparently.

Although Insomniac staff have already cited Prince of Persia and Jet set radio games as inspiration for S.O., Gamertroll sees plenty of Sega's Crazy Taxi in here too. 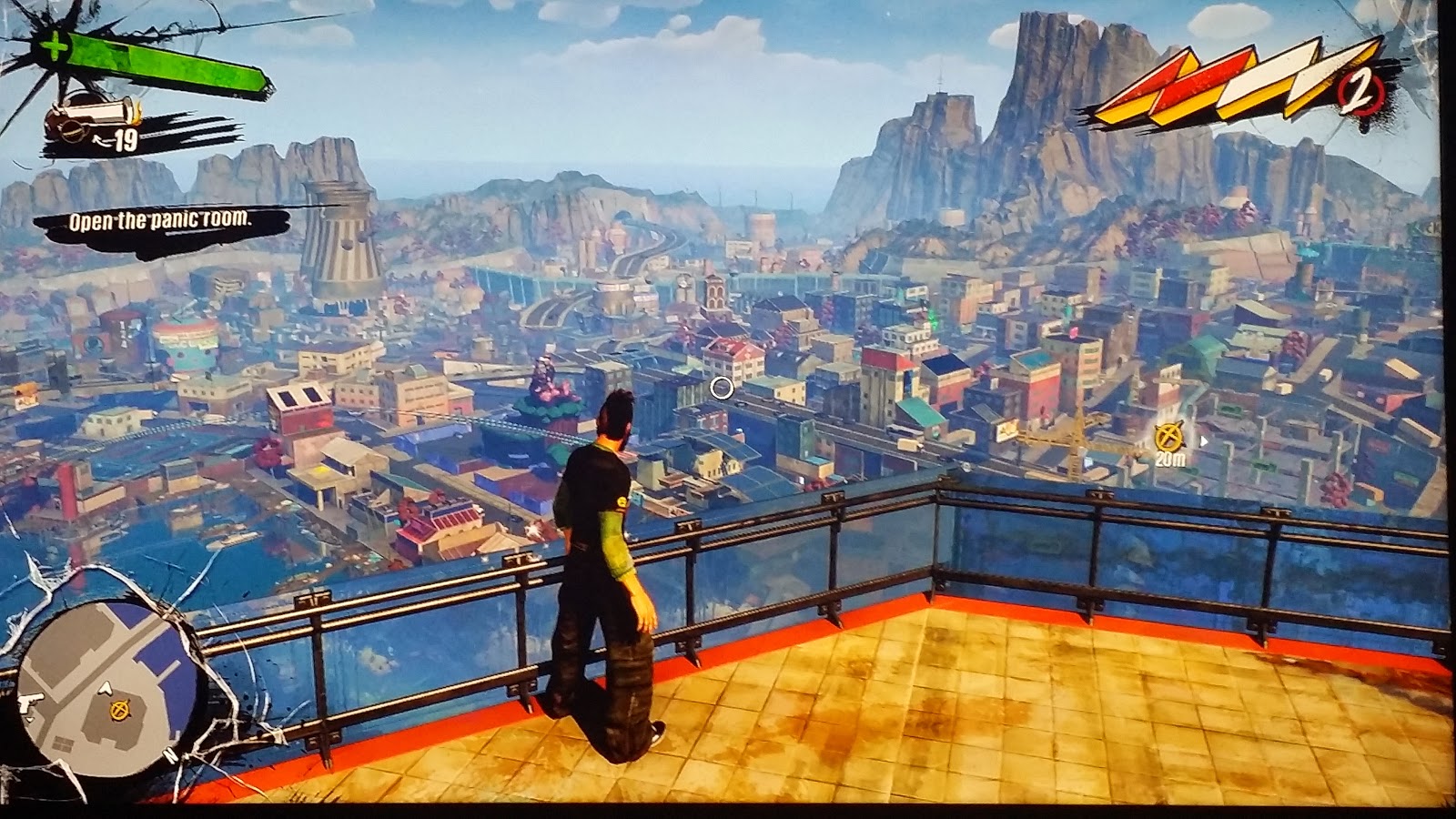 You see, games like this are all about movement. How you move, the fluidity and excitement generated by the facilitation of that movement, the connectability and interchange of actions, even how cool you look on screen whilst moving through the environment - the trick for the Developers here is to achieve simplicity in control without the experience ending up fun but ultimately too shallow. Cinematic Beat 'em ups like Devil may Cry and Bayonetta are combat heavy cousins of this genre as are Tony Hawks skateboarding titles at the other end of the scale. However, this Arcade style has been fairly 'mined out' in latter years in Gamertroll's view, 2010's 'Vanquish' was probably the last shooter that really excited or pushed the envelope in this respect. S.O. is the new contender... so how does it do? 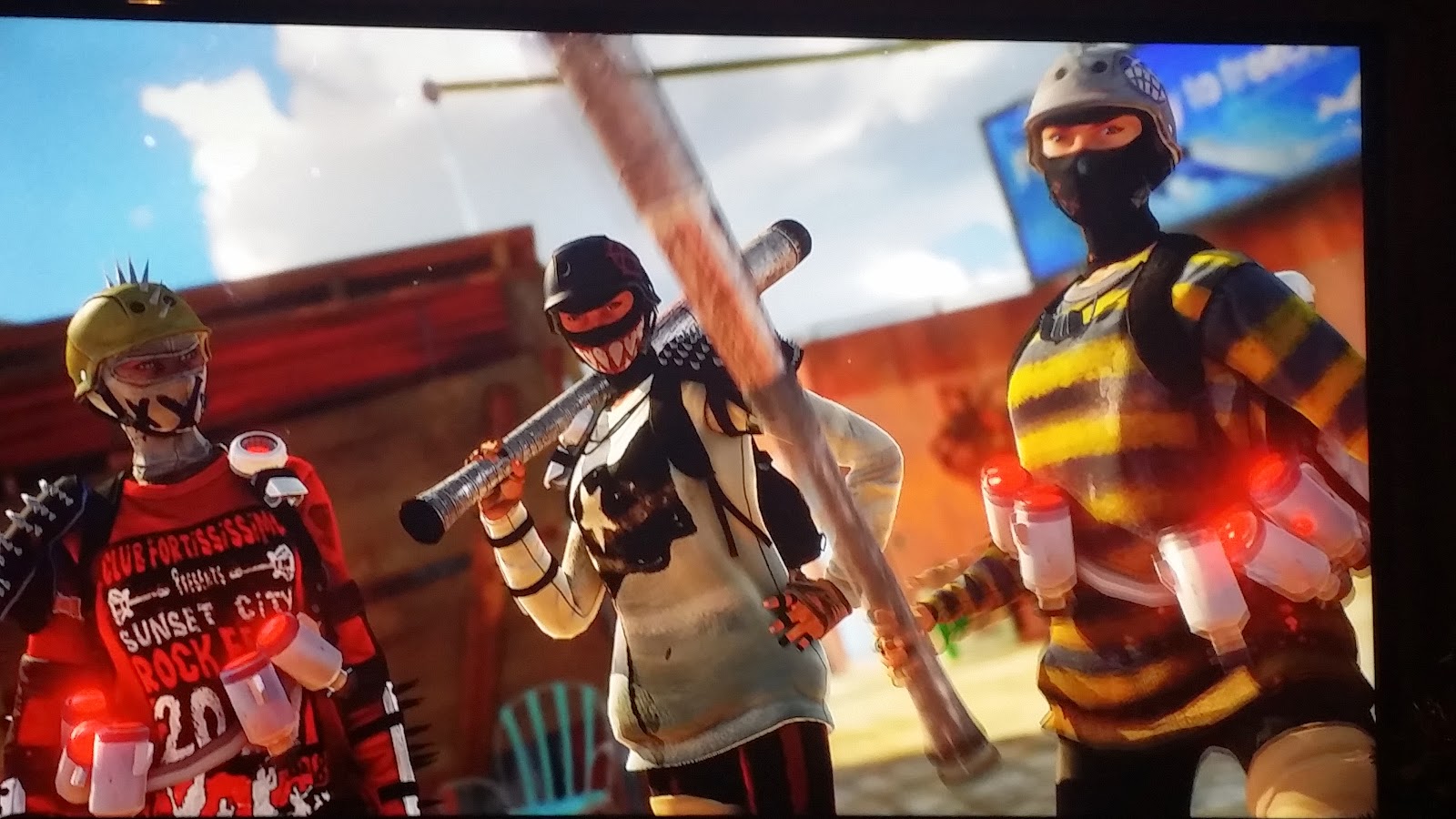 Hmm. Let's see, 90% of the Gameplay is spent grinding rails. On them or over them, balance is not a consideration, your attention is instead focused on finding your next rail transfer or aiming at targets to shoot at. That movement I spoke of? In S.O. movement is made the key to all attainment, it's been linked inseparably to the shooting mechanic. You want to successfully blow the crap out of the daft orange enemies whilst standing still? Nope. Forget it. You have to move to charge up all offensive capabilities so off you go.


As for the plot, those orange Monsters? Don't ask, just
move along friends, nothing to see here.


As with all games at the minute, there are upgradeable skill trees and clothes to buy so metrosexuals can slip on skinny jeans or satisfy their closet Barbie dress-up fetish. Although the novelty weapons are great fun to wield, the Overdrives that make up the aforementioned skill trees are a particular disappointment. Considering they feature in the game's title it's surprising that these Overdrive's, once unlocked, only serve to add a percentage to, for example your flame damage or ammo clip sizes - if you're lucky, you might earn a slightly larger fire trail special effect when performing an action. Huge frown over that. Slack.

Honourable mention has to go to S.O.'s punk protagonist as the foremost candidate for the most excessive use of 'Fuck' dialogue in the history of video gaming. I'm serious, Call Norris McWhirter, it's a Guinness book occasion, Conker the Squirrel swore less. Gamertroll can say Fuck. It's fun to say fuck fucking fuckers because hey, fuck 'em all. It adds nothing to the game except a more mature rating it otherwise wouldn't have had...

Here's where the frown increases. Gamertroll managed to break S.O. in less than half an hour. Don't believe it? watch me break it in my video! No amount of button mashing could free the character from constant freefall stuck in between a water tower and a vertical rail. Can we add S.O. to 2014's loooooong list of broken games? One thing is certain, it happened.. so you be the judge. Think that's being picky? Gamertroll played Tony Hawks Skateboarding 17 yrs ago for hundreds of hours and never once had to turn the Playstation One off because of a bug.

Also if you want to try the multiplayer, buckle yourself up for 20 minutes. 'Chaos squad' is inescapable, once started you have to ride it all the way to the bitter end, wanna quit? Nope. Everybody hates a quitter but taking control from the player in this fashion should be a development no-no. Who wants to commit to 20 minutes of unflinching concentration everytime they play? Not this Troll. 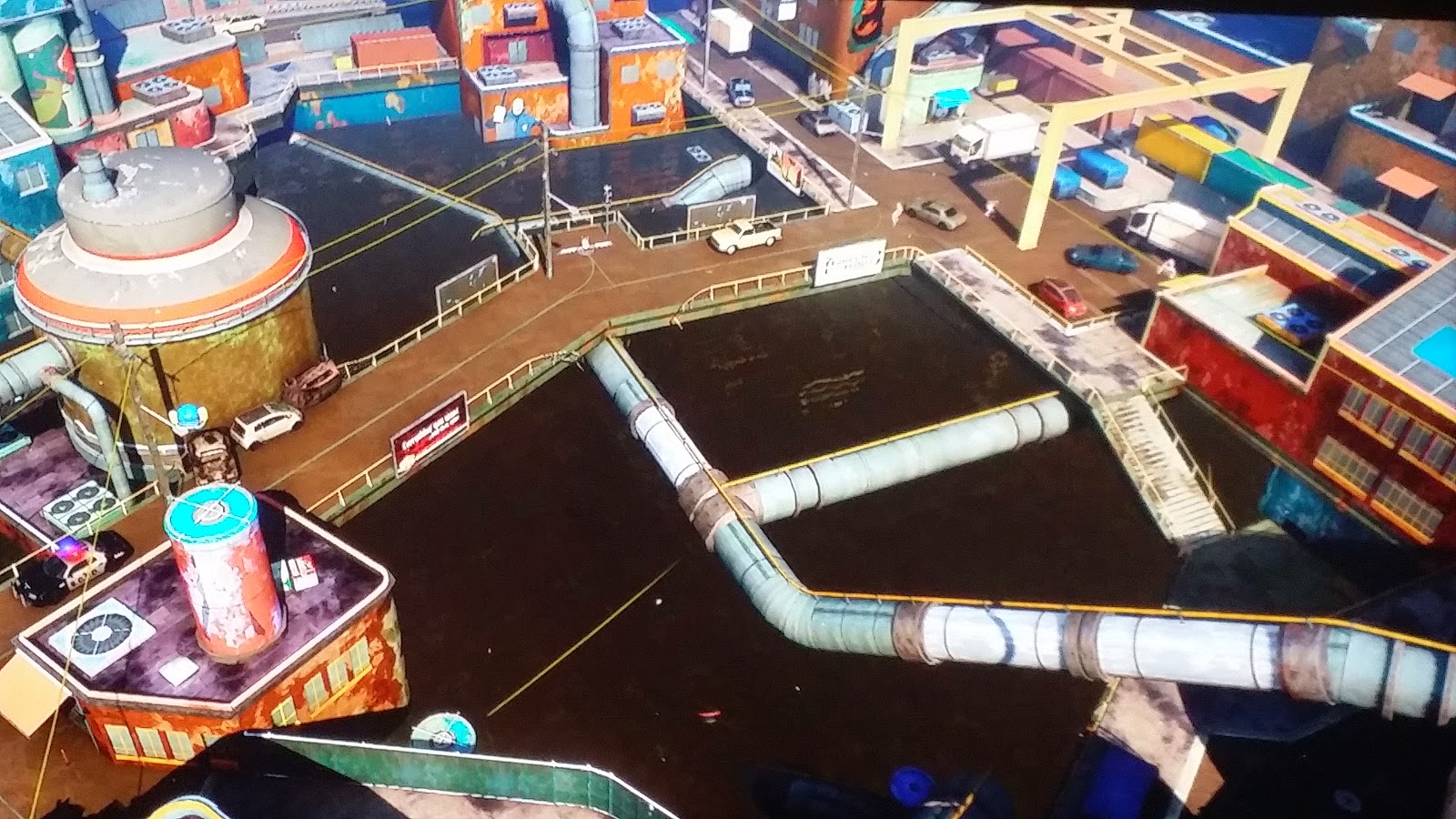 Much has been made of S.O.'s graphical prowess and it's hard to disagree upon viewing it. The problem is that that prowess appears wasted on flourishes that don't affect the gameplay one iota: like a myriad of flashy character respawns and non-interactive environmental dressing like the beautifully realised drumming mechanical animals in the 'Oxford's arcade hideout'. (Nevermind, not half as interesting as you'd think). It's a gripe to be firmly filed under 'Gamertroll's opinion', but S.O.'s game world is terribly plastic and superficial, brimming over with contrived elements for the player to grind and bounce off. Yes yes, Gamertroll knows the game is obviously supposed to be Improbable but why is an operating fan spring-board mounted in a skip?
That sort of nonsense would be all fine and good if Insomniac had achieved the game's much repeated mantra, 'The world is your playground', but they don't. It's your playground, certainly, but it hardly constitutes an immersive, interactive 'world' by today's gaming standards. There is no comparison between S.O.'s city and that of Dead Rising 3's for example. 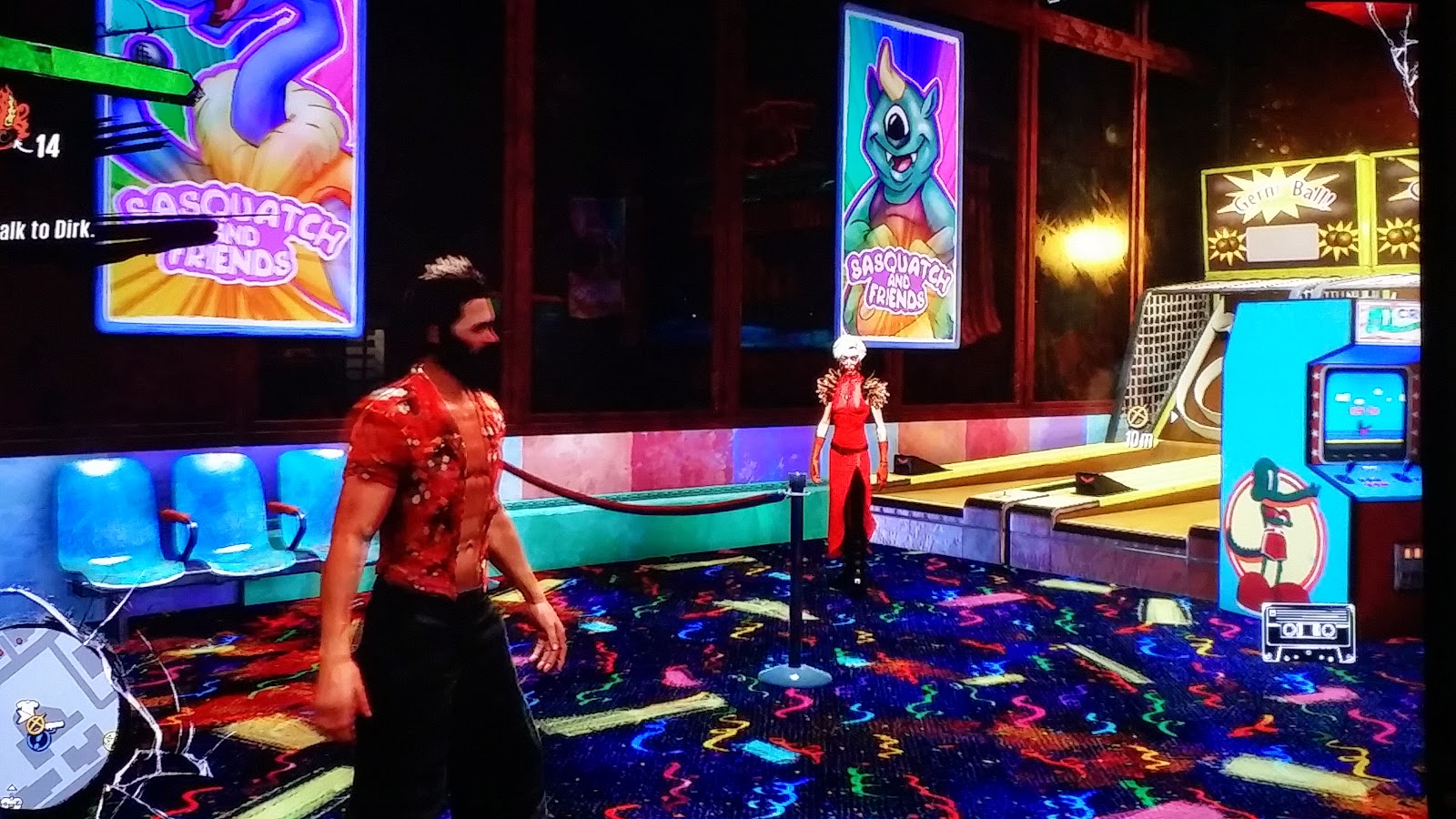 It would be unfair to say that Sunset Overdrive is merely style over substance because there is a game here of 'trick and shoot' that could be fun to somebody other than Gamertroll. These arcade titles have a place, but only if they have that indefinable 'X factor', just look back at Crazy Taxi, It was great, Once.. but Gamers can no longer be expected to listen to Sonic Youth singing 'ya ya ya ya yaaaaaah' 60 times in one sitting. The world has turned since then.

Although that 'je ne sais quoi' appears to be missing from S.O., there is however, a mildly therapeutic sense to careening about a city you can't be bothered to remember the name of.

Now to the major issues. The humour that aims to pin the whole wacky narrative together is not really funny at all. Whilst occasionally capable of delivering vaguely amusing moments, for anybody to genuinely laugh out loud at the cutscenes they would need to forego their medication. Or mix it with Whiskey.

Although S.O. tries to employ this humour to make a joke out of the relentless 'fetch-quests', the smile will fade from your face as you realise that any joke is really on you. Annnnd LMAO! Here's another pointless fetch quest while you absorb that fact. 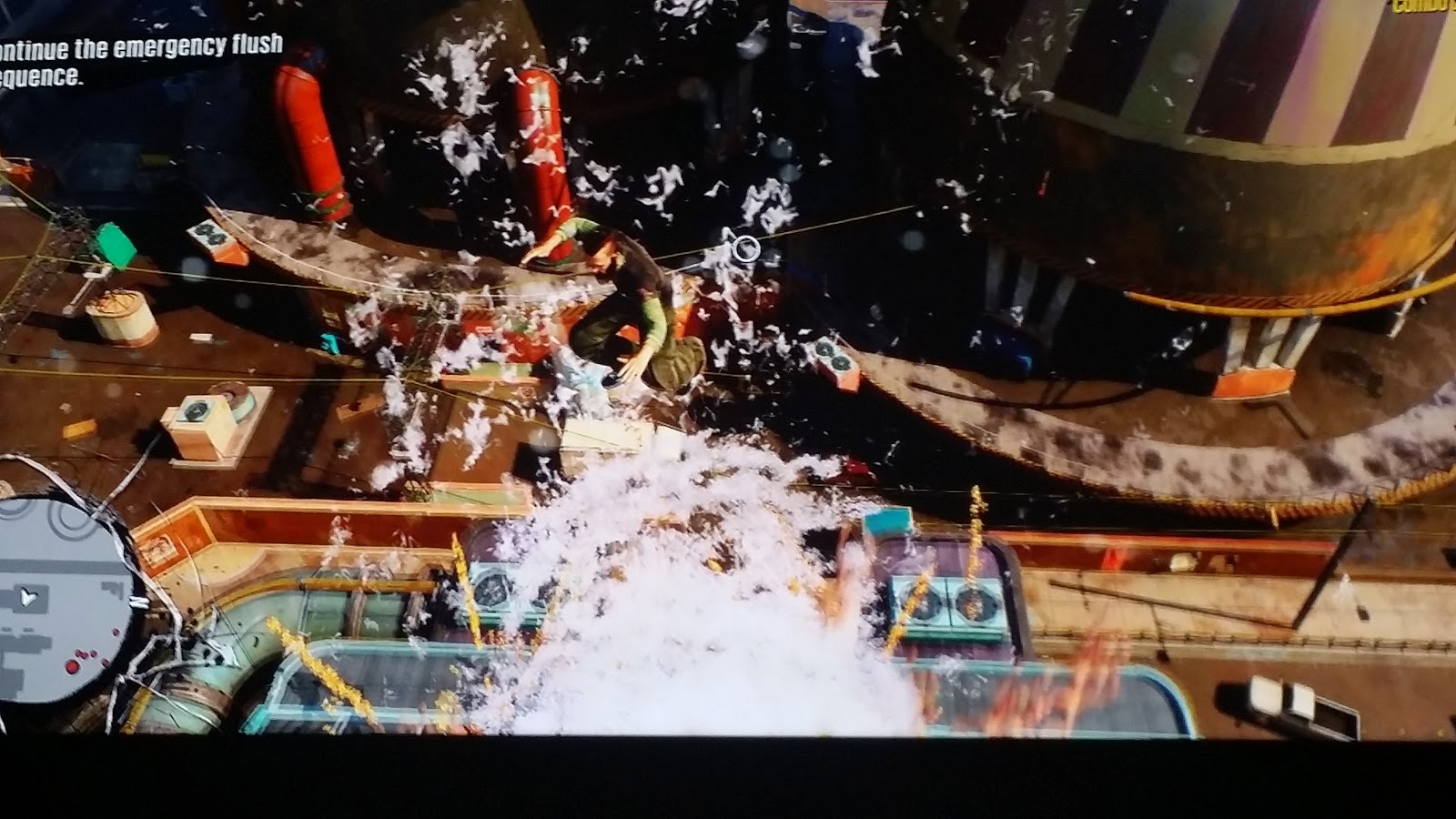 If you're anything like Gamertroll, before long you'll be hammering the 'A' button to skip the endless guff. If you do stop to read the mission descriptions you only have yourself to blame. Just grind a powerline to the next way point, get object or kill enemy... NEXT! That's it.

No challenge is harder than a couple of attempts.. so there is no challenge -there's that therapeutic element again at least. It's really only a question of the amount of time you want to put into discovering S.O., as a casual gamer's choice that could be of merit. One supposes.

There's not a horrible amount of things wrong with S.O., indeed, the details are well crafted. The problem is that the whole game is such an acquired taste. You couldn't call it Marmite because nobody should really hate it, It's just that many, like Gamertroll will be utterly disinterested by it's cheap thrills and prominent punk aesthetic.

A flash in the pan then. If Sunset Overdrive fails to charm you from the outset you will question it's substance. Hordes of people were singing it's praises on release but have since gone quiet. They are not playing it anymore. There's a new 'Mooilrig' area DLC, nobody cares. Gamertroll has had this game since release day but couldn't be bothered to review it until now.

Email ThisBlogThis!Share to TwitterShare to FacebookShare to Pinterest
Labels: Arcade, Insomniac, Not getting it, Review, Sunset Overdrive, Xbox One exclusive