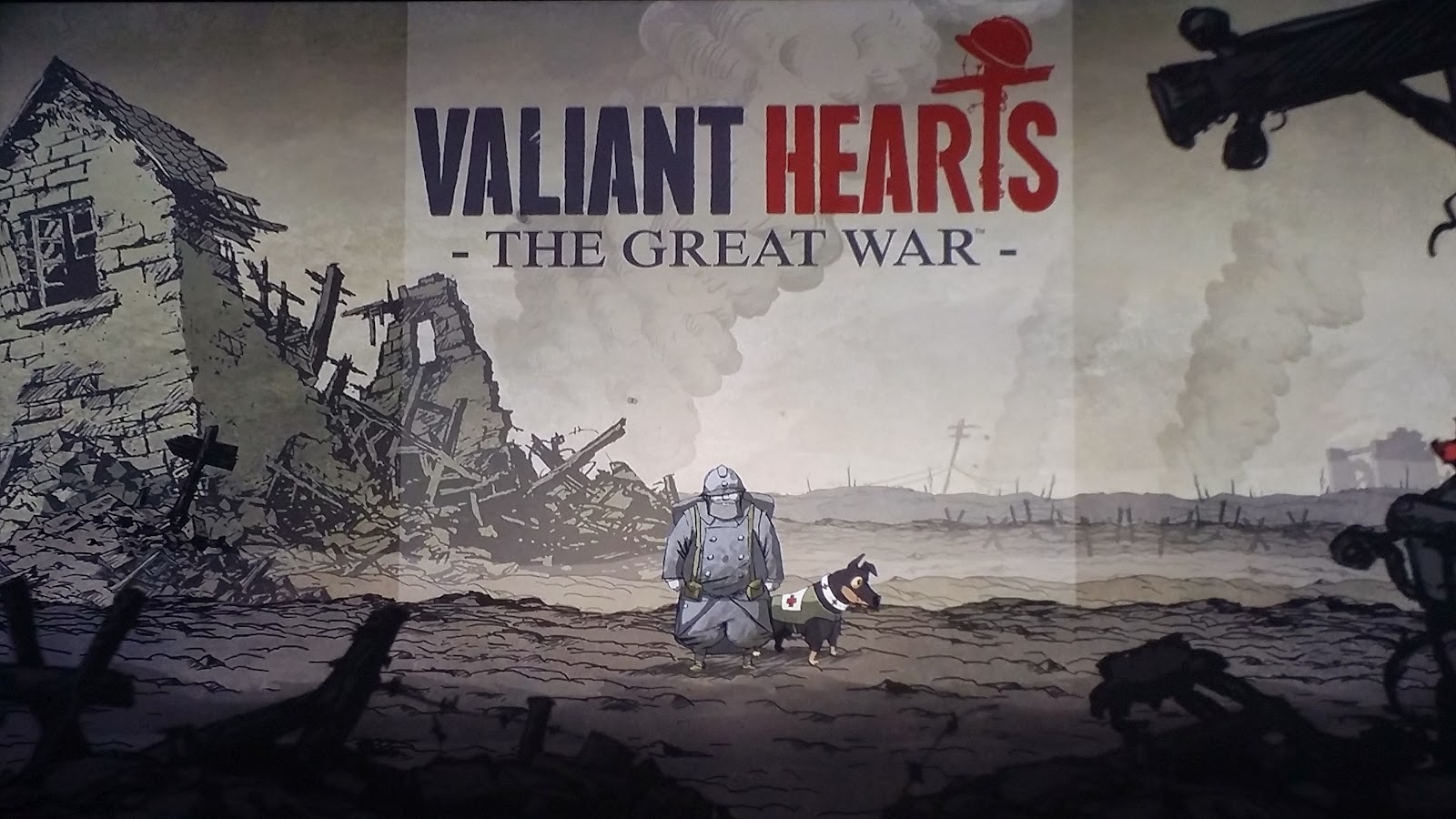 Gaming has been 'growing up' for quite some years now, increasingly we are getting titles turning up with a lot more going on 'up top'. Valiant Hearts -The Great War- is another of these games. It is set in WW1 with (GASP!) only the most cursory of interests in getting the player to shoot people.

Since the moment Gamertroll 'booted' Valiant Hearts up from the system dashboard he was engrossed. The need to see what would become of the story's protagonists seized Gamertroll by the psyche early on and wouldn't let go, despite the wealth of other quality big-budget games sitting in a pile ready to go. The constant call of Halo: The Masterchief collection went ignored, Farcry 4 and Sunset Overdrive also have been sidelined whilst Valiant Hearts sucked up their electricity. 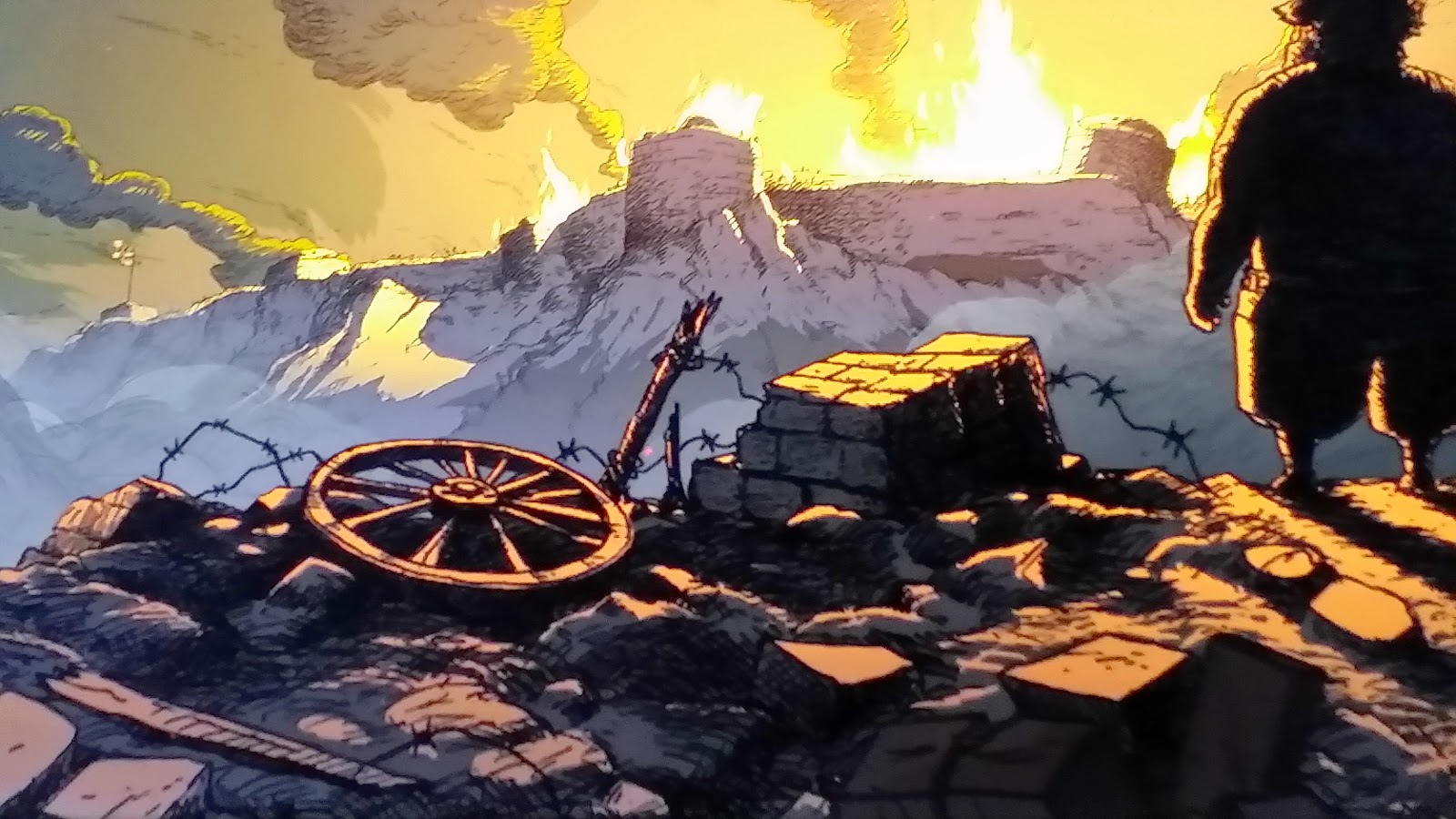 This is a special game, once you start it you will have to finish it and it's a surprisingly long journey. One-part history lesson, one-part a traumatic and engaging tale of love, faith and friendship. Telling the story of normal lives torn apart by the tragedy of war, Valiant Hearts is an amazing interactive cartoon, delicately handled and profoundly affecting. Anyone who has seen the last episode of 'Blackadder goes forth' will know exactly the nature of the fatalistic 'feels' found here.

Essentially the game is an intricately animated side-scrolling puzzler with compelling but linear, multi-threaded character storylines. Uniquely for a game about war you will rarely be asked to kill anyone. It's the carefully handled treatment of it's historical elements, combined with the variation of executable actions and the superb contextual integration of puzzles into the narrative, that elevates Valiant Hearts into the top echelons of it's genre. 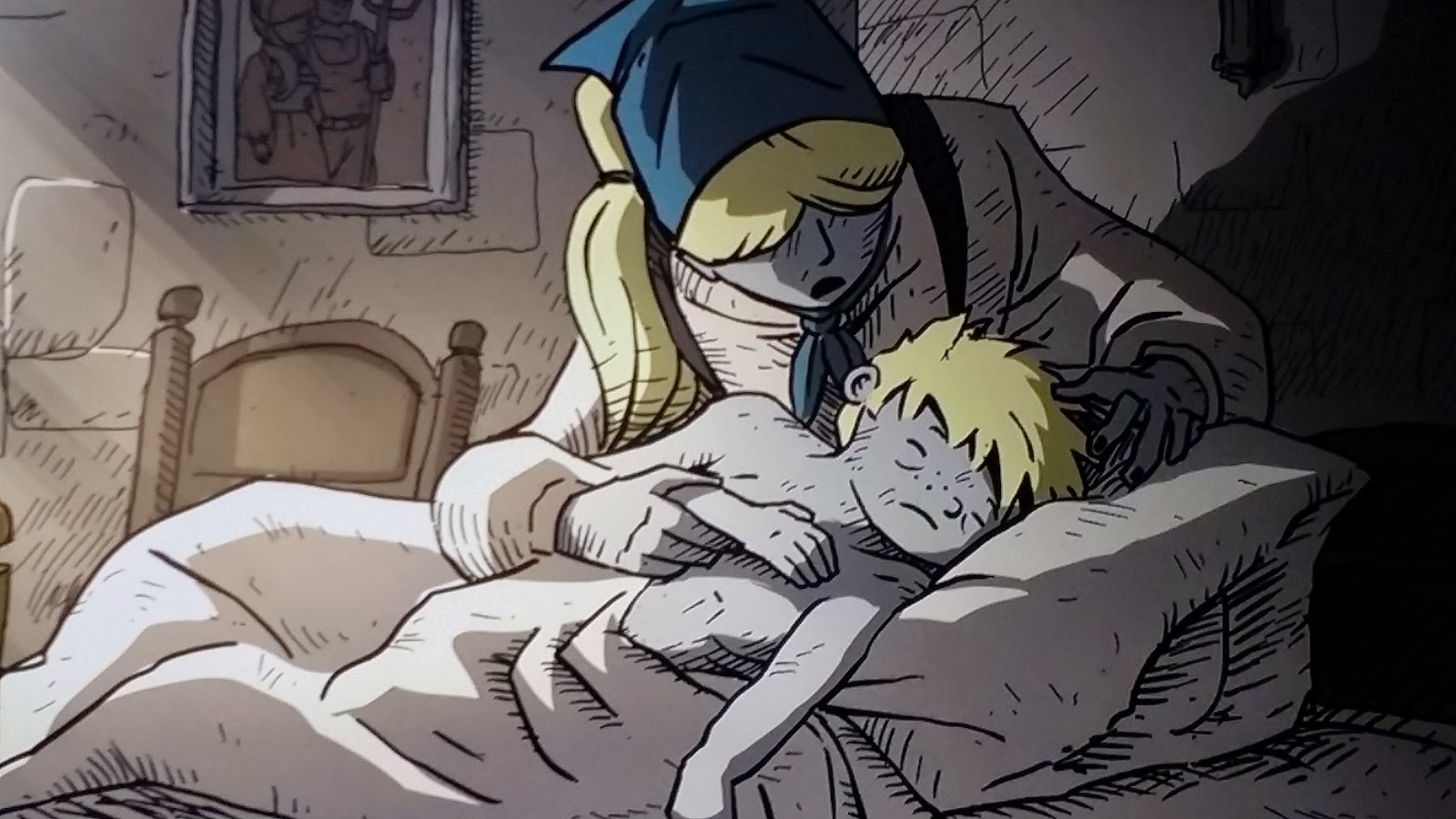 Valiant Hearts gets deeper into the muddy tunnels and trenches than any WW1 Game Gamertroll has ever seen, it's grim but strangely affable depiction of desperate trench war, with no-man's land (complete with putrefying corpses hanging on barbed wire) losing none of the impact from a cartoon portrayal. In fact it's precisely the juxtaposition of the cartoon characters and the harsh nature of the subject matter that often enhances rather than detracts from the game's atmosphere.

The first instance of Chemical warfare using chlorine gas, Bi-planes dropping skull-piercing steel darts, Soldiers drowning in mud, zeppelin bombers, the bitter underground conflicts and the first introduction of tank warfare, are just a few of the many harsh realities visited in Valiant Hearts and all serve not only to educate but to enrich the gaming experience with variety. The driving mini-sequences and the opportunity to use war machines provide some of the best diversions from a game that at it's core was already enjoyable in the first place. Gamertroll has especially enjoyed the sections where you collaborate with comrades or your trusted canine companion 'Walt'. Crucially your buddy's Artificial Intelligence never let's you down and surprisingly complex puzzles can be executed by simultaneously throwing objects while issuing Walt commands. Have no doubt, The control interface here is excellently accomplished. 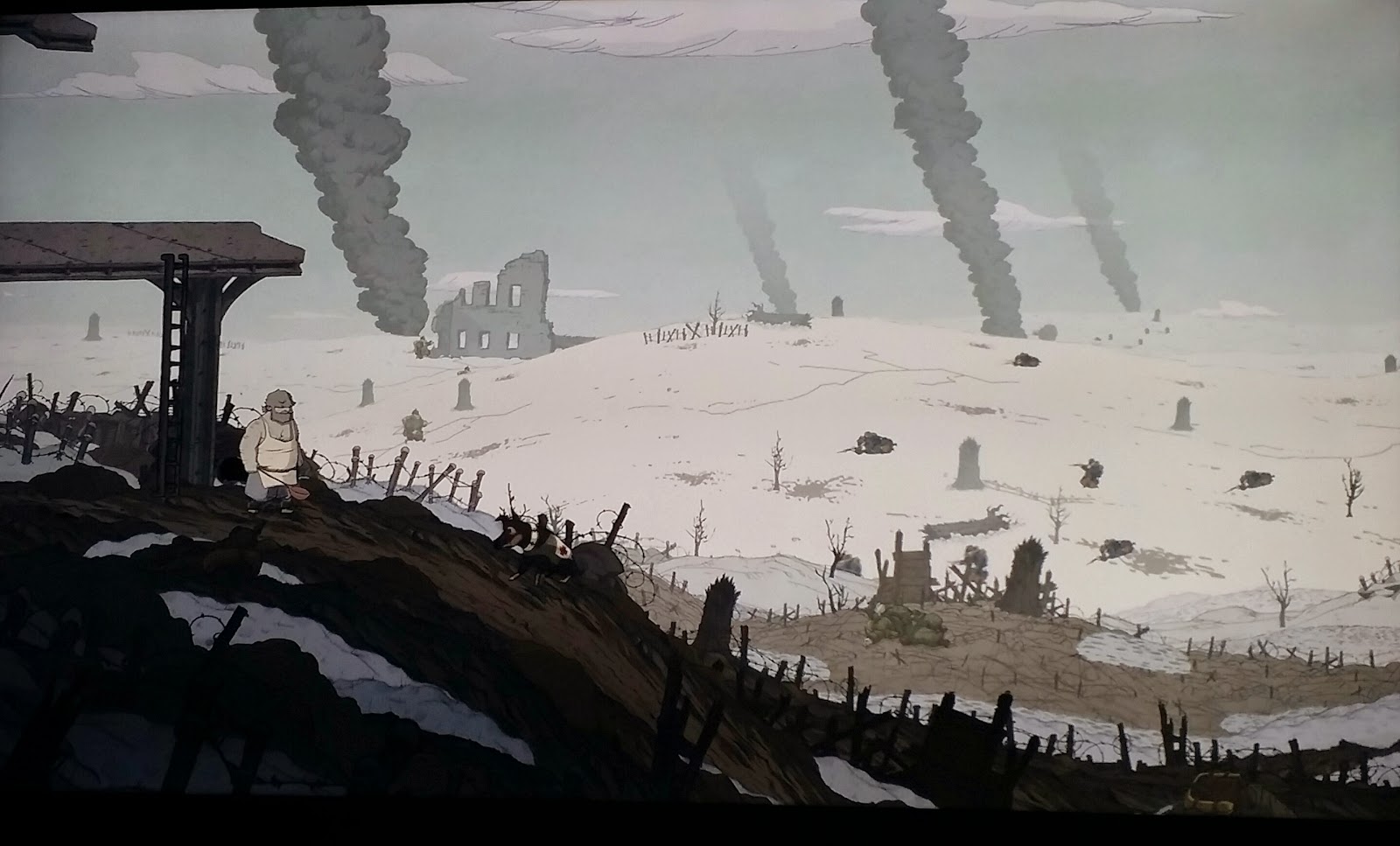 There are other, different diversions also: If you like to read and learn when playing your games, Valiant Hearts obliges readily by providing a wealth of historical documents and background trivia found in the form of artifacts hidden away for you to discover amongst the rubble.

No matter how many times one hears of how horrific The Great war was, it never seems to fully sink in. Valiant Hearts helps cement this message again for another generation by teaching and entertaining in equal measure. Approximately 37 MILLION lives were lost in The Great War, by contrast 440000 lives were lost in the entire Vietnam war (68,000 U.S.), That's a fraction of the deaths at Battle of Verdun alone (600000) and as for The Somme... You might as well double that figure. The sheer loss of life was staggering and Gamertroll applauds Ubisoft Montpellier for creating this firm but delicate remembrance.

Should a game highlighting the human cost of WW1 be so entertaining? Well, there's plenty of fun to be had here but Gamertroll doesn't see a problem with it - History museum's don't aim to be dull and boring and neither should historically referenced video games. Valiant Hearts Handles it's subject matter with tremendous respect and the experience is all the better for it. The encouragement for the player to empathise with the characters through the emotional peaks and troughs of their collective journey is one of the games' finest successes.

We're looking at fairly simple game constructed with great aplomb so it's hard to find fault. If anything the the flip-screen mechanic enabling multilayered environments works for the most part but can, in the larger areas or underground sections be slightly disorienting. The traversal between foreground and background can occasionally cause your faithful doggy companion to pop-in and out of sight disconcertingly but these really are tiny niggles which never significantly detract from the experience.

Ubisoft Montpellier's Valiant Hearts is a stunning achievement, The art direction is faultless, think of the video game equivalent of Raymond Briggs's famous graphic novel 'When the Wind Blows' and you'll be in the same ball park. 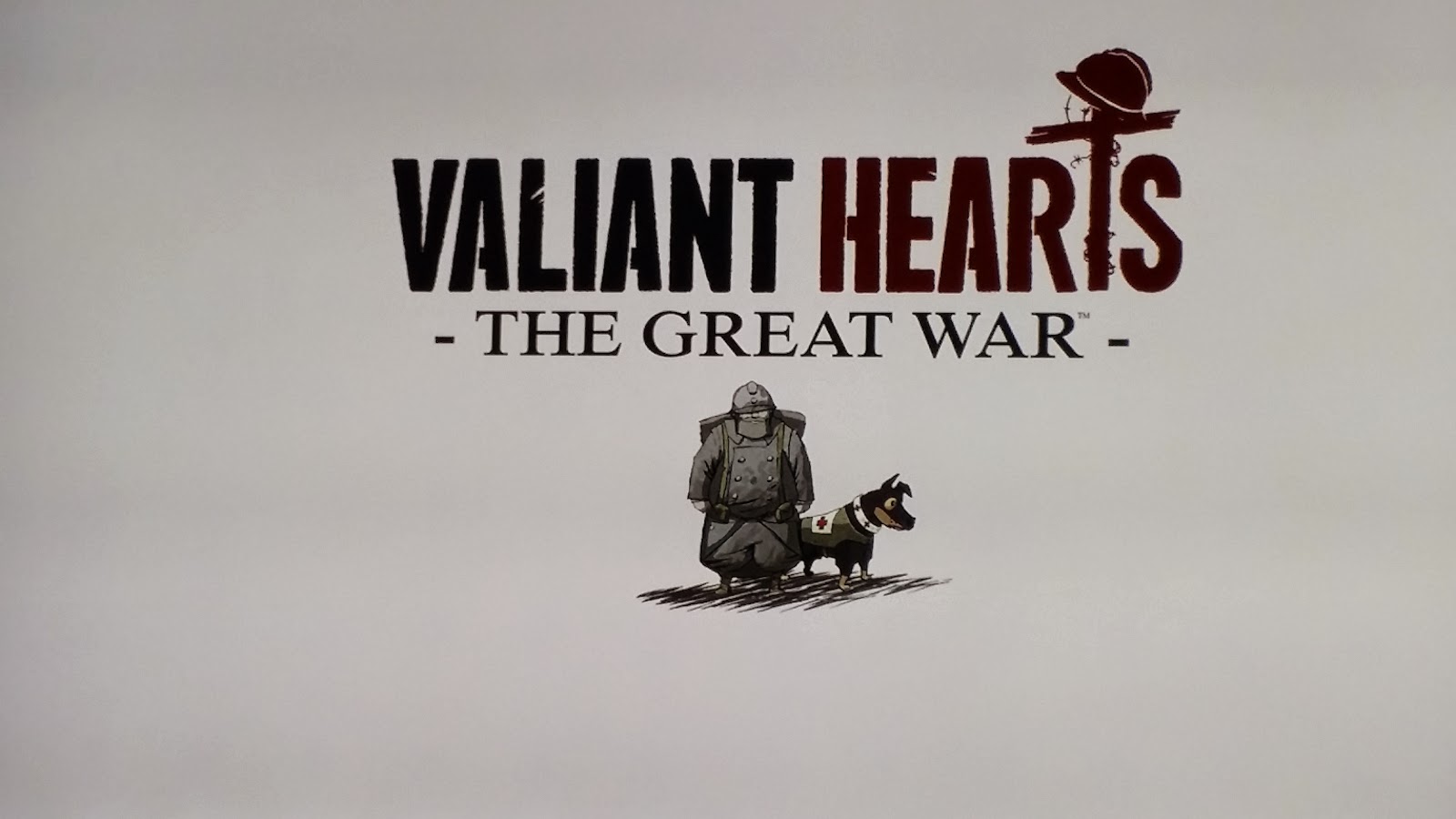 As Gamertroll stated at the beginning of this review, this is a surprisingly long game, but it never once gets repetitive or outstays its welcome. It is with great restraint that Gamertroll bestows Valiant Hearts with an 8/10. It would be easy to go overboard when scoring a game like this but even considering that the art direction is inspired and the narrative is fantastic there is still merely a good game mechanic underneath it all. If you're particularly interested in the history of WW1 though, it's truly unmissable.


*Footnote - At time of press Valiant Hearts is available for download on sale for as little as 5.99GBP - That's half the price of the abysmally disappointing 'Never Alone'. Do yourself a favour...
Posted by Unknown at 20:32

Email ThisBlogThis!Share to TwitterShare to FacebookShare to Pinterest
Labels: Budget game, Review, That's the way to do it, Ubisoft Montepellier, Valiant Hearts -The Great War-