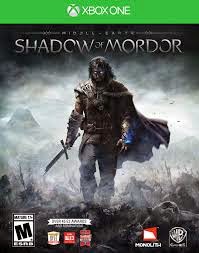 Game Adaptations of Tolkien's world have always ranged between poor and average. Famously 'The Hobbit' was the first, appearing on the Zx spectrum, a text adventure with a handful of slowly constructed images. Even as one of the first games Gamertroll ever had, it failed miserably to inspire.
'Go North'?
'GFYS' more like, why anybody wanted to play that instead of Manic Miner seemed impossible to fathom.

The answer of course, is that Tolkien's creations are so cherished that the need to have a videogame good enough to do them justice has been a pressing concern pretty much as long videogames have existed.

It's not that substantial efforts haven't been made to achieve this goal either. industry Giants have bestowed big budgets to this end, especially in the aftermath of Peter Jackson's films. Good-ish titles have emerged but none which really nailed it.

Middle earth: Shadows of Mordor (Henceforth SoM) has already been given some extremely favourable reviews, could that mean developer Monolith has finally cracked it? Gamertroll will explain how they have, sort of. There's some messy hammer strokes and marks left on the sideboard but the nail has been forcefully driven home. 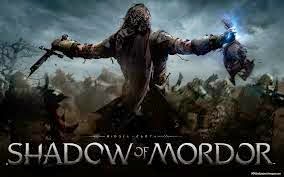 Firstly, Gamertroll is happy to report that the authentic LOTR atmosphere is in place. The voice acting, orchestral score and visual style are perfectly in tune with Peter Jackson's superlative movies. There'll be no spoilers in this review, only the assurance that if you're a fan, you should thoroughly enjoy the characters and story cutscenes. The background details never clash with established Lore and SoM even dares to add it's own chapters to the story. Very bold indeed.

The primary reason Gamertroll would describe SoM's gameplay as a 'messy success' is down to the fact it's so hugely derivative. 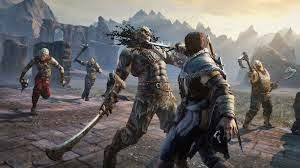 It's beyond plausible deniability, Monolith is guilty of wholesale plagiarism with this game. As guilty as a puppy sitting next to a pile of poo. The combat IS ripped off from the acclaimed Batman games (Y button is your friend here), the area exploration IS stolen and reproduced verbatim from the Assassin's Creed games, right down to 'synchronising' on Towers to expose new objectives. The only difference being, that both these plagiarised elements are made more simplistic than the originals. Copying other games more simplistically should not work but somehow Monolith has pulled it off. The game is an absolute pleasure to play. 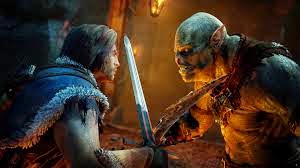 Perhaps it's the introduction of SoM's only new idea: The nemesis system, that brings the game to life. It's a big part of the game's draw and yet again another simple premise that works beautifully. When fighting hoards of Uruks it becomes obvious that your enemies are not as visually generic as you would usually expect. The reason for this individuality becomes frustratingly apparent the first time a feckless grunt gets in a lucky stab in the middle of a big melee. The little git may not have been your main opponent but next time you meet him he'll be promoted, fighting and looking a damned sight harder. Gamertroll can't be bothered to explain the nuances of the Nemesis system here, all you need to know about it is that it can punish hard and it can reward in equal measure. In fact it only goes and ties the whole bloomin' game together. 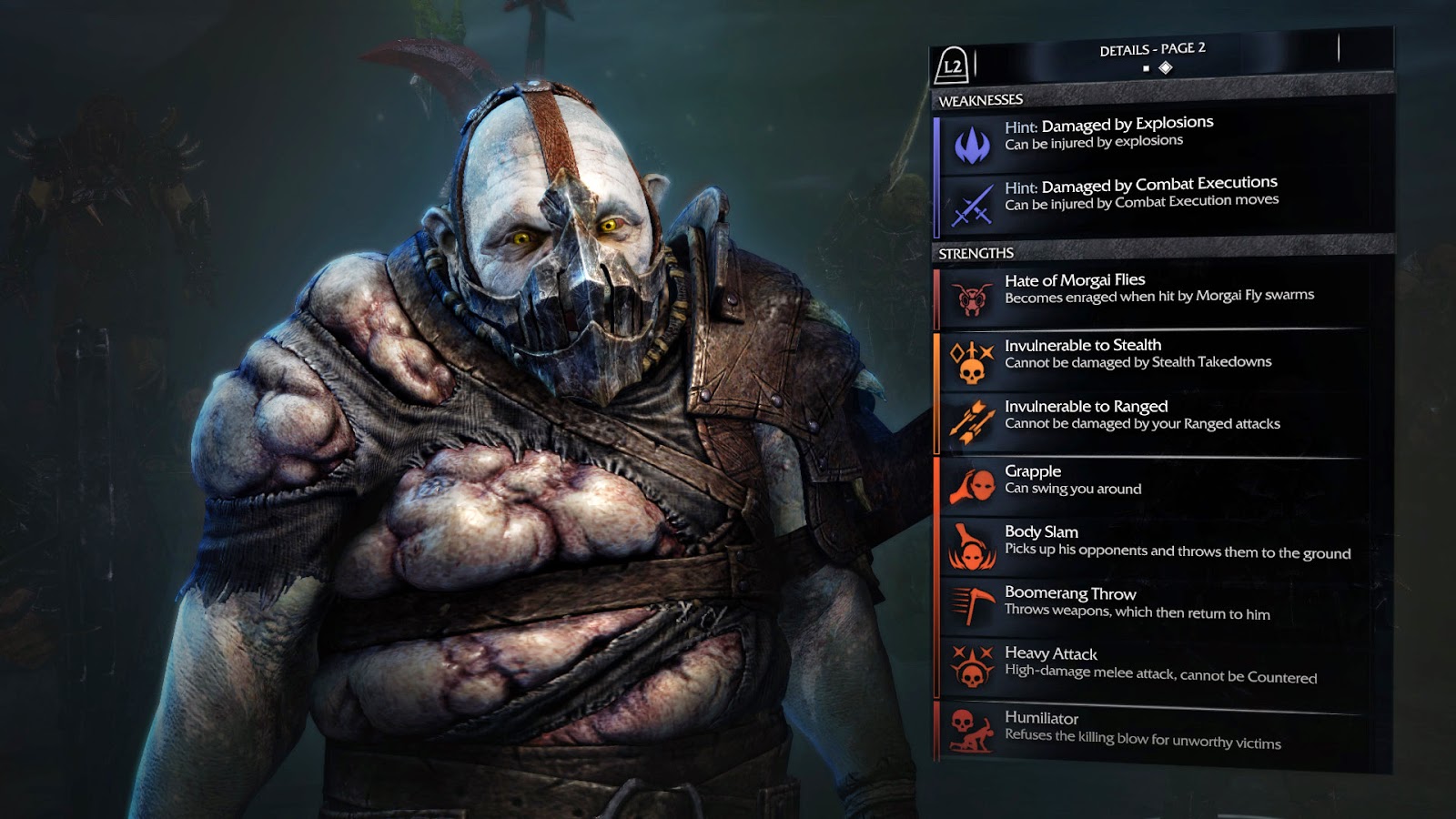 SoM is all about the Uruks and focusing the games attention on them was a shrewd move by Monolith. The humans, Elves and Dwarves are all fine and well, if a little stiff, but lets not muck about.. The Uruks are the stars of the show. Capitalising on this, the Uruk dialogue is authentic sounding and genuinely funny, their characters as individual as their appearances. Gamertroll has been watching Peter Jackson's films again in parallel and it has to be said that SoM's Uruks, right from the grunts to the Warchiefs, are actually better characterised visually than their celluloid counterparts. These aren't actors with latex masks flopping about on their heads- they're painstakingly animated, living, breathing Uruks - the effect is marvelous. All achieved without any loss of congruity. Now go chop the bastards heads off. 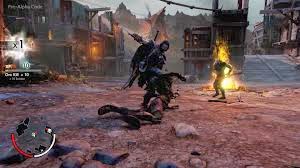 All of which brings Gamertroll to the graphics, they are superb. On the Xbox One the attention to detail on Talion's swishy cloak is astonishing, the textures shown on Mordor's many ruins, rock faces and grasslands are majestic; It's those Uruks again though, their character models really do steal the show.

Other details? You've got the standard collectibles, weapon and skill tree upgrades, all competently executed. The survival challenges and incidental tasks are all pleasant diversions, a little bit of optional reading although Lord knows why anybody would want to read all the tedious flower descriptions. 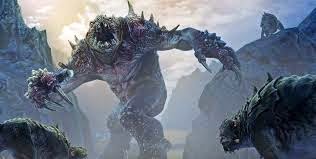 There's wildlife in Mordor also, most notably Caragors which can be tamed and mounted (Oo er), little clawed ghoulish gits Gamertroll can't remember the name of, and monstrous Graugs. They all add satisfyingly to the variety of play.

It's not all a 'Miraculous success' though. Gamertroll noticed one glitch where a bloody Uruk kept returning from death.. even after previously chopping his head off. It only happened twice and Gamertroll wouldn't have minded so much, but the particular Uruk captain in question was a complete arsehole.

More importantly the SoM is too small. Whilst the activities and sandbox gameplay are more than 20hrs worth, the geographical size of the areas in which you play are measley by say, Assassin's Creed standards.

Furthermore, despite the lovely textures, the second area feels like a repeat of the first area - just with grass and trees. 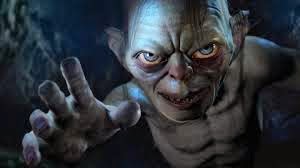 SoM is a child of It's time unfortunately and Gamertroll is certain that once the planned DLC is out, the game will be of an appropriate size. There will be a time when Gamertroll stops complaining about this sad development in videogaming, however that time hasn't yet arrived. Chopping off the last quarter of our videogames to sell to us later is the act of skanking bastards. 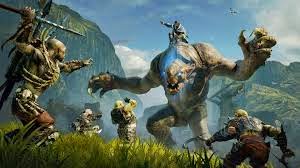 Taking 'Diet' reproductions of various gameplay elements from other successful games and wrapping them up in a Character driven Uruk hunting campaign proves to be a surprisingly potent recipe. The best LOTR game so far? Gamer Troll thinks so,  the potential of a sequel that builds on what has been achieved here is an exciting prospect. 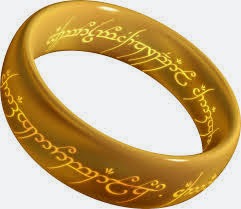 This will not be the last we hear of  the Warner Bros 'Middle Earth' prefix.