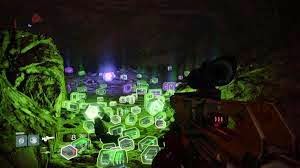 Have you ever seen a child get an expensive present and all they wanted to do was play with the cardboard box it came in?

It's a similar thing with a certain proportion of the gaming community. Not realising that the journey invariably justifies the point of playing games, a significant number of gamers will always seek to find shortcuts to attainment. 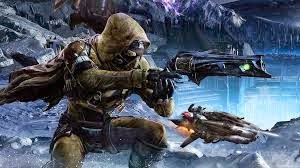 Higher character levels, Legendary weapons and
armour are available earlier in Destiny to those simple enough to piss away days of their lives, tediously farming in a cave near Skywatch, on the moon

Bungie has declared war on
these feckless space cadets and the battlefield is taking place over these so-called 'Loot caves'.

Bungie's official statement signaled dismay, "Shooting at a black hole for hours on end isn't how we dreamed Destiny would be played." 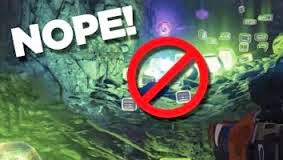 Gamertroll agrees. This behavior can be likened to taking a holiday in the Bahamas then subsequently electing to spend the whole time sitting in the airport terminal waiting to fly home, just to get the best seats.

Alas, no sooner did Bungie hotfix the original loot cave exploit, less than 24hrs later obsessive grinders have uncovered yet another, this time in Old Russia, Earth, specifically located in the Rocket yard. Now dubbed 'Loot cave 2.0', thousands have since flocked to it and commenced farming hour after hour, like idiot savants. 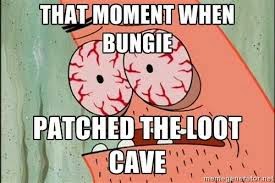 However Bungie responds to this continued disobedience, the mass refusal to play the game as they intended, is anybodies guess; whatever action they do take, they'd best recognise that sometimes, if you take the cardboard box off of the child it may choose to ignore the toy that came in it altogether..