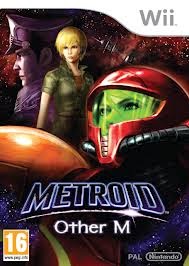 There's bound to be a new Metroid game soon so I thought I'd see where we are up to by visiting the last one to be released.

Oddly, Team Ninja is responsible for this entry into the series and the emphasis on fast-paced combat is yet another dose of their trademark style. Unlike most Team Ninja efforts however, the looks are surprisingly low-rez, making it look old even for it's August 2010 release. Gamer Troll remembers the superb Gamecube 'Metroid Prime' looked significantly better (if a tad sodding pastel for this Troll's tastes). 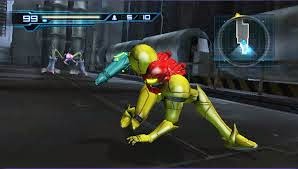 The control interface does feel slightly baffling at first, most bizarrely you can't use
the nun-chuck eliminating the option of the analog stick, leaving just the cross pad on the standard remote held horizontally. Why they opted for this obverse method I will never know as it leaves the player attempting

to control the game's protagonist, Samus, on a 3D plain using a 2D crosspad. Having said that, control is possible and you will, in time come to grips with the Admirable array of innovative contextual controls. Pointing the remote at the screen to shoot a frozen enemy in first-person-perspective almost makes up for the odd controls. Almost. 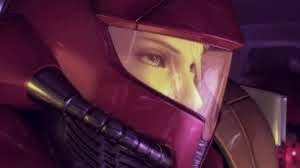 There has always been a bit of a void in Samus Arran's personal back story and MTOM seeks to address this through lush CGI. In the kind of outburst only possible after years of cartridge enforced CGI repression, Nintendo takes the full motion video and runs amok like a child with a new toy. These story sequences look great but often outstay their welcome as a result, sometimes running north of 5 minutes each. Any gamer who has sat through any of the recent 'Metal Gear Solid' games cut-scenes will know that you really can have too much of a good thing. 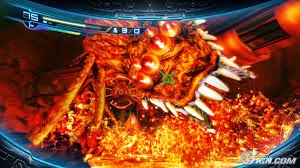 Super Metroid games have been an acquired taste from the start. Their haunting, eerie atmosphere combined with rewarding exploration has long been the primary draw for fans with a individualized abstract presentation and BGM score rounding out the package. Does this one measure up? 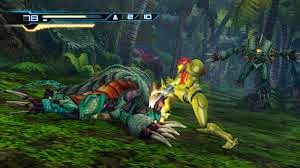 First, exploration is dead. Every objective is marked on a heads up display map. Boo! Hiss!
Then you have the sound palette which is expertly chosen but let down by the game's visual design. Whilst still excellent, it has somehow lost the oddly barren sense of solitary exploration found in it's forebears. I COULD blame the clashy and fragmented Wii graphics capabilities for the tragic loss of atmosphere but Mario Galaxy proves otherwise. This Troll blames the introduction of camp, anime non-player-characters which infest the story sequences, chopsing away about the insignificant plot. It is THEY who bring about the greatest ruination to the traditional SM atmosphere.

Things are not by any means all bad, other classic series features like engaging boss battles are as good as ever but listen, I've got a coupla' goats in the cellar that won't juice themselves, so I'll cut this short. 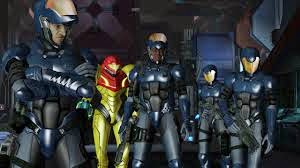 Deep down there's a solid game here, if you can be arsed digging for it. The real problem is that this is not the game Metroid fans will have expected or wanted.
On a positive note: if you've never liked the Metroid games' unique atmosphere and exploration - they're now gone. If you've also always fantasized about one of videogaming's toughest female characters having an idiotic, squeeky voice and capering about with a bunch of anime girlie-boys... today is your lucky day, poo-pickler.
6/10
The next Metroid better not follow this one, or the series is sunk.
Posted by Unknown at 09:23